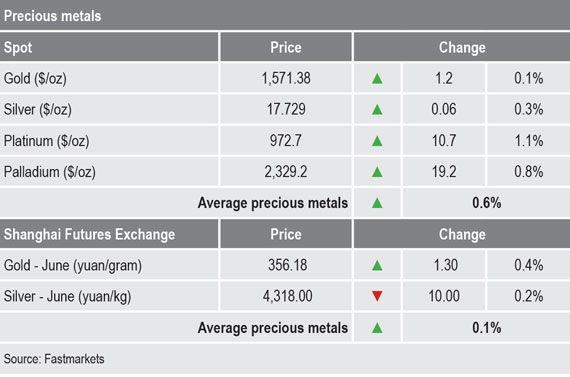 The broader markets were mixed on the morning of Monday February 10, with equities in Asia generally weaker, as were metals on the Shanghai Futures Exchange, while the London Metal Exchange was firmer across the board.

There is still much uncertainty around the impact of the Wuhan coronavirus (2019-nCoV), but with more businesses returning to work in China this week, we might get a better feel for the likely impact on Chinese demand.

With China generally a net importer of metals, the demand shock could well see inventories build up in the country and along the supply chains that supply China, while exports of products are also likely to continue to be disrupted.

Trading volumes have been above average again with 9,871 lots traded as of 5.37am London time.

In China, the most-traded base metals contracts on the Shanghai Futures Exchange were, for the most part, weaker and down by an average of 0.4%, with April aluminium the only metal bucking the trend with a 0.1% gain, while April zinc led on the downside with a 1% fall. April copper was off 0.4% at 45,650 yuan ($6,532) per tonne.

Precious metals were firmer this morning. The spot gold price was little changed at $1,571.38 per oz, but that was up from $1,565.58 per oz at a similar time on Friday morning. Silver prices were also little changed at $17.73 per oz, while platinum and palladium were up by 1.1% and 0.8%, respectively.

Economic data already out shows China’s consumer prices index rose 5.4% against an expected rise of 4.9%. The index has been climbing at a fast pace since February last year when it troughed at 1.5%. China’s producer price index climbed 0.1%, this after being negative since August last year. Japan’s economy watchers sentiment index climbed to 41.9, from 39.8 previously. Later there is data on Italian industrial production and EU Sentix Investor confidence.

For now, concerns about supply disruptions from China seem to be lifting base metals prices on the LME, while weaker prices on SHFE seem to be reflecting the likely demand situation in China. Overall, the combination of China being a net importer of most base metals and with the country facing a negative demand shock, it would not be unreasonable to expect prices to be weaker, but this might already have been priced-in, given the price weakness seen in the second half of January.

We expect choppy trading in the days and weeks ahead, until more is known about how big the demand shock will be.

Gold prices are edging higher and are likely to continue to do so until more is known about when the Wuhan coronavirus will be brought under control. Prices might well have been rising at a faster pace were it not for the stronger dollar and generally strong equity markets.