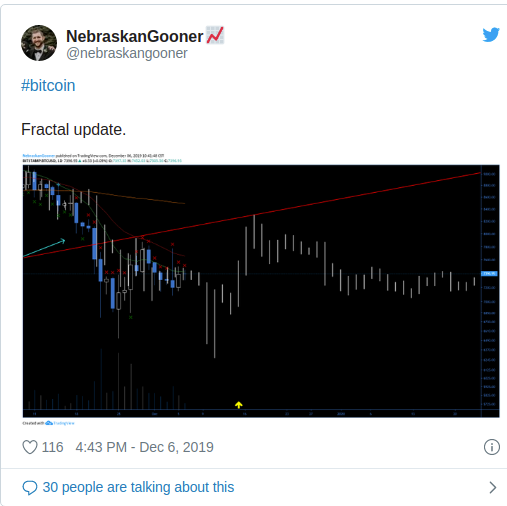 Bitcoin’s precipitous drop to $6,600 seen earlier this month caught many traders aback; nearly no one, not even the top traders and analysts, expected for that price action to play out as it did in real life. Few predicted the subsequent bounce to $7,800, where BTC sits as of the time of writing this, too.

Though, one trader has been calling the moves all along, using a lesser-known and slightly unorthodox method of analysis to predict the directionality of the Bitcoin and cryptocurrency market.

Related Reading: Eat My Shorts: Everything You Need To Know About The Bitcoin Bart Pattern

Over the past few months, a popular trader on Twitter, NebraskanGooner, has been touting what is known as a “fractal” via his social media pages.

A quick aside for those unaware of what a fractal is: a fractal, in financial markets, is when the historical price pattern or direction of an asset is reflected/seen again on a different time frame and/or for a different asset. While some analysts see them as pure coincidences, analyses have found that fractals can work well for Bitcoin and other cryptocurrencies, potentially due to the inherent cyclicity of this market.

The fractal predicted the cryptocurrency’s dramatic price drop to $6,600 weeks before it took place, and the subsequent recovery to nearly $8,000 seen a week or two back. Now, as Nebraskan recently pointed out, it shows that Bitcoin is about to fall off a precipitous cliff in the coming week or two, in a move that may bring the price of BTC to $6,200, maybe even lower. That would represent an 18% drop from current levels. That’s not all. The analyst pointed out in a separate post that Bitcoin’s weekly chart looks bearish again in spite of the fact that a recovery was seen after the strong move lower. The analyst specifically remarked that BTC failed to break the key 99-week simple moving average and a horizontal zone of resistance, before adding that the “increased buyer volume” narrative is a clear misnomer and that the on-balance volume indicator saw a bearish retest.

With that in mind, the cryptocurrency trader remarked that he expects for Bitcoin to see a “slow bleed” lower, which will be marked by investors trying to buy the dip and then being stopped out, then a “fast dip with rapid absorption” in the $6,000s.